Today, Gabriel Medina (BRA) won the 2018 World Surf League (WSL) Title, claiming a final victory at the  Billabong Pipe Masters in Memory of Andy Irons. Pipeline delivered epic 12-to-15 foot barrels for the final stop on the 2018 World Surf League (WSL) Men’s Championship Tour (CT) and final jewel of the Vans Triple Crown of Surfing (VTCS). Medina made history in 2014 as the first Brasilian to ever win a World Surfing Title and now cements himself in the history books with a second crown.Gabriel Medina Wins Second World Title and First Billabong Pipe Masters 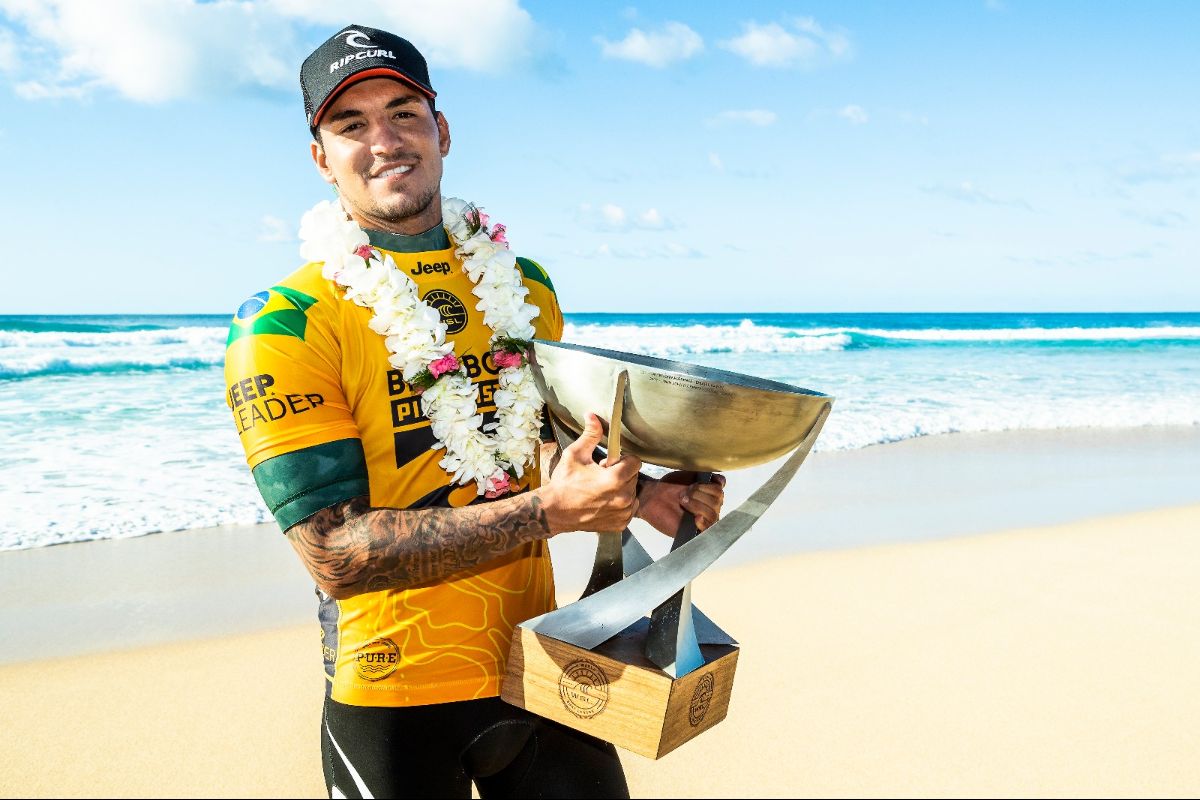 “All my heroes have won this contest,” Medina said. “I’m stoked to be a part of everything here. Winning this event is a little different. I really wanted this one, and I worked really hard for this one so I’m so happy. That was a good final. Julian (Wilson) is the toughest competitor to go up against so I’m lucky I got two good waves. He won in a Final against me a few years ago and I got this one, so it feels good. I really appreciate everyone that came down to watch and I’m stoked to put on such a great show. I’m so happy to be part of history – I’ve put in a lot of work.”

Medina’s road to the Title in 2018 was bumpy at first but then the Brasilian switched gears mid-season and claimed back-to-back wins in Tahiti and the inaugural Surf Ranch Pro. He continued to impress as one of the most consistent surfers through the European leg with two equal-third places and arrived in Hawaii with a 4,740-point lead over his direct competition Julian Wilson (AUS). The rest is history as Medina reached the Final to claim his second WSL Title.

“It’s hard to believe, this year was a long and intense year,” Medina continued. “Everyone put in a lot of hard work and this is the day. I’m so happy and thankful. To have the opportunity to travel the world with family and friends and to do what I love…it’s the most fun job in the whole world. This is such a special day for me and I’m so happy to do it again. Julian and I always have great battles. He’s always pushing the limits, and Filipe (Toledo) too – he’s a great surfer who had a great year. I love to watch them surfing and I’m a big fan of both of them. I’m so happy to get this trophy again. I had to put in a lot of work to get here. I like to surf when there is pressure and I think that’s when I do my best. After Jeffreys Bay (South Africa) I just put a bit more of me into each surf and each training. At the beginning of the year it all felt so far away but after Europe, it felt much closer.”

In 2014, the then-20-year-old Medina wrote a new page in surfing’s history books as the first Brasilian to win a World Title, in an exciting year-long race against Mick Fanning (AUS), John John Florence (HAW) and Kelly Slater (USA). It is also the year the phenomenal surfer from Maresias shut down all criticism about his bigger-surf aptitudes by winning two of the most prestigious events in Fiji and Tahiti, finishing off the season with a runner-up at Pipeline.

With over 8 million followers on social media, Medina has built a global and dedicated fanbase – growing the profile of professional surfing both in Brasil and in the rest of the world. His friendship with football superstar Neymar Jr has only contributed to elevating his profile as a celebrated athlete and Medina’s influence in his home country continues to reach new heights.The emergence of the Brasilian Storm dates back to 2011, when an unprecedented 7-strong group of Brasilian surfers made the Championship Tour roster, the same year 17-year-old Medina first qualified.

Only accessing the elite tour halfway through the season, Medina managed to clinch two event victories right away as a preview of what was to come. It took two more years for the phenomenon to find his competitive rhythm, winning his first World Title in 2014. His success inspired compatriot Adriano de Souza (BRA), who went on to win Brasil’s second World Title the following season.

In 2018, Italo Ferreira, Filipe Toledo, Willian Cardoso, and Medina were collectively responsible for nine out of 11 CT event wins this year, with Wilson claiming the other two.The event’s Final today was a clash of epic proportions between the two strongest surfers in the field Medina and Wilson. Both surfers threaded lefts and rights to put big scores on the board, but ultimately it was Medina who took out the final matchup of the year and claimed the prestigious Billabong Pipe Masters title for the first time in his career.

Wilson capped off an incredibly consistent season where he claimed two event victories in Australia and France, two additional Final appearances and another four strong results to finish second overall for the first time in his career. On Finals day at Pipeline, the Australian needed to make the Final for a shot at bringing the World Title home, and he delivered with inspiring performances, most notably facing the 11x World Champion Slater in the Semifinals. Unfortunately, Medina reaching the Final left no chance for Wilson to lift surfing’s most prestigious trophy.

“I’m so thankful for the incredible waves and the locals for allowing us to surf here,” Wilson said. “The hopes and dreams of the World Title were there today and it’s been an emotional one. It came down to the final heat of the year and I’m ready to do it again next year. I put my heart out there and gave it my all, but Medina deservedly took the title and I’m so happy for him. Beating Kelly out here in great conditions is no mean feat and I take a lot of confidence from that. I’m so happy to represent my country and do my very best. It wasn’t enough to get the title but it was enough to share a final with the 2018 Champion. I’ll take some time to rest and come back in 2019 fired up for sure.”

Jesse Mendes (BRA) won the VANS Triple Crown of Surfing title followingJordy Smith’s (ZAF) Semifinal loss to Medina. Mendes collected a fifth place at Haleiwa, a runner-up in Sunset and a 9th at the Billabong Pipe Masters. Mendes is only the second surfer from Brasil to claim the prestigious award after Medina in 2015.

“I’ve been coming here for 13 years already,” said Mendes. “It was a dream but a far dream. I’m so thankful, so blessed and thank God for making this happen. Going against Joel (Parkinson), one of the best surfers ever, was such an honor. I want to thank my family for always supporting me no matter what, my girlfriend, my coach, WSL, my fans, and the surfers – it couldn’t have been a better Final. I also want to thank the local community for giving us the best waves over the past few weeks.”

Coco Ho Steals Show at Women’s Pipe Invitational
The break before the Final saw 3x World Champion Carissa Moore (HAW)take on compatriots Alessa Quizon (HAW), Coco Ho (HAW) and Zoe McDougall (HAW) in a women’s invitational heat. World No. 11 Ho dominated with radical maneuvers on rights at Backdoor and took out the win ahead of Moore in second, Quizon and McDougall placing 3rd and 4th respectfully.

Earlier in the day, Joel Parkinson (AUS) surfed the last heat of his professional career on the Championship Tour, defeated by Yago Dora (BRA) and Wilson in Round 4. The 37-year-old Australian who claimed the World Title in 2012, spent 18 seasons among the world’s best surfers and received many accolades, being regarded as the most stylish surfer on tour.

“I was having such an emotional reception with everyone there,” Parkinson said. “It’s been an honor, I’m proud of what I achieved. It’s given me an amazing lifestyle and so many good moments. The tour has so many hills and valleys, all these emotional rollercoasters. Like any professional sport, it’s just the way it rolls. It’s nice to get to the end of it and finally maybe just run on an even keel for a while. I guess Kelly is the really last one of our generation and I’m sure it will be pretty emotional once he goes and surfing’s in good hands now with the next generation.”

In the second Semifinal, the battle between Wilson and 11x World Champion Slater happened mostly on the rights of Backdoor and the Australian managed to fence off the all-time greatest surfer at Pipe (Slater won the event 7 times) to advance into the Final against newly crowned World Champion Medina. Slater was sidelined for most of the season by a foot injury sustained last year at J-Bay but finished today with an Equal third place result.

“Even though it had a lot of north in the swell, there are some really really good waves,” Slater said. “It’s been a fun day and yesterday was a blast. I’m pretty excited to come back to competing full-time next year because I had almost a year and a half off, to kind of recharge the batteries and get excited again. I watched all the guys, saw where the level is at, worked on my equipment, worked on my body and got back in good shape.”

This man longboarding on a wheelchair is inspiring

@eeroettala going rodeo into the sunset 🌅 some

@kanaandern with an insane Street mega ramp from